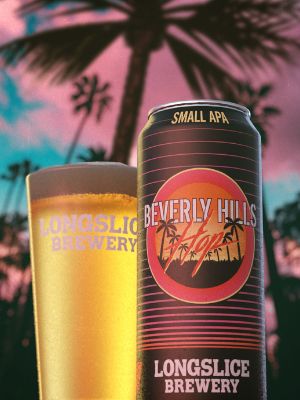 The heat is on, so cool off with Beverly Hills Hop.

Inspired by our favourite buddy-cop movie, this Small American Pale Ale takes us back to the hot Californian summer. Palm trees, neon colours, and a juicy light beer that delivers on flavour.

Beverly Hills Hop is one light beer that doesn’t skip on flavour. 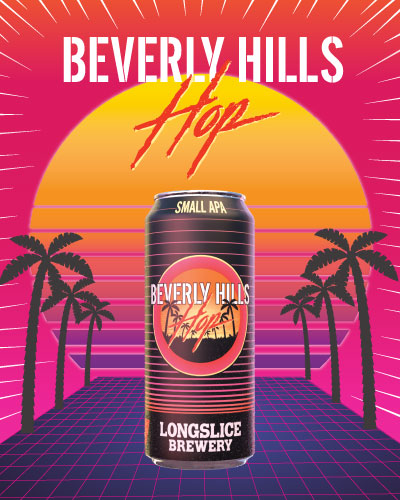 Don't get a banana stuck in your tailpipe by drinking all those strong beers! Drink our Small APA, a full-flavoured beer with low alcohol percent.
What is a small beer? Well the easiest definition for a small beer is a beer with a lower amount of alcohol by volume. Usually between 2.8% to 3.5% alc/vol.

We're able to achieve such a flavourful light beer with the Salvo™ hop aroma extract.

Added aroma and flavour without all the extra bitterness!

You may know that hops are added to beer for their bitterness and their distinact aromatics. With Salvo™, the alpha-acids (which create bitterness) have been separated from the essential oils and beta-acids found in the hop flower. The result is a juicy hop flavour and aroma without any extra bitterness from the hops.

Small beers are not easy to make but they deliver a mouthful of flavours. Try a craft beer from Ontario; try our Beverly Hills Hop Small APA and cool off the hot summer days.

Beverly Hills Hop is our summer seasonal release and it’s a one-off, so make sure to order sooner than later! Come try it at The Aviary or buy your beer to go in our retail shop inside The Aviary or online! Free next-day deliveries, five days a week, Monday through Friday to all ‘M’ postal code (GTA) - minimum order $20.

Or find us on Canthesis for deliveries outside of the GTA!

Find us on social media for our latest news and hilarious videos.